Bird Flu May Take a Bite Out of Thanksgiving Turkey Supply

Bird flu may take bite out of Thanksgiving's turkey supply 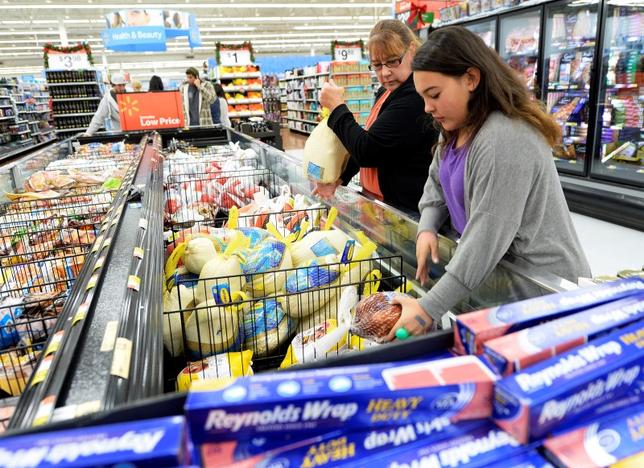 Tina Corpus and her daughter Christina shop for turkey at a Walmart store in the Porter Ranch section of Los Angeles November 26, 2013.
REUTERS/KEVORK DJANSEZIAN
(Reuters) - The largest-ever U.S. outbreak of avian influenza, which has devastated Midwestern poultry and egg producers in recent weeks, could be felt at Thanksgiving tables across the nation come November, farmers and some trade groups say.
The virulent H5N2 strain has already spread to 14 states and led to the deaths or scheduled euthanizations of more than 21 million birds, including 3.3 million turkeys in Minnesota, the nation's top turkey producer.
And now, with Thanksgiving just seven months away, farmers say they may be running out of time to raise enough turkeys -the traditional centerpiece of holiday feasts - to meet the demand.
Once a farm has been infected, flocks must be culled, composted in barns, then disposed of. Buildings must then be thoroughly disinfected. The whole process can take up to three months before a new flock of turkey poults can be brought in, said Steve Olson, executive director of the Minnesota Turkey Growers Association.
After chicks are re-introduced to the barns, farmers say, it typically takes about four months to produce a full-sized hen – the type of turkey most Americans prefer for their holiday feasts.
If breeder farms that supply the young birds have also been infected -- as some in Minnesota have -- simply acquiring the chicks could prove challenging.
And in Minnesota, there's still no sign of an end to the outbreak, despite tight biosecurity measures and quarantines. Already, at least one turkey processing plant has cut back on workers' shifts because of a lack of birds to slaughter.
"We're going to have fewer turkeys coming out because of this," Olson said.
"The question we can't answer is how much this is going to impact our total system, because this isn't over yet," he added.
Of the nearly 240 million turkeys raised last year in the United States, nearly one in five came from Minnesota farms. About 30 percent of the Minnesota birds are sold as whole turkeys at Thanksgiving and Christmas.
The remaining 70 percent are sold year-round for deli meat, frozen meals, ground turkey and other products, according to industry data.
"There's a sense of pride in farmers, in what they do," Olson said, in a state where farms have often been in the same family for generations. "This is challenging their belief in their ability to raise turkeys, because they have not been able to stop the disease, despite them doing everything they can do from a biosecurity standpoint."
RIPPLE EFFECTS
As the reach of the virus continues to expand, companies up and down the turkey supply chain are watching closely.
Tyson Foods Inc said on Monday that the avian influenza has affected some of its turkeycontract farms in neighboring Iowa, where farmers have had to euthanize birds.
While that loss could affect production levels at its turkey plant sometime this summer, Tyson does not produce the whole turkeys typically used at Thanksgiving dinners. Its turkey division is a small part of the company's overall business, and Tyson does not expect the loss to have a material financial impact.
Food retailers are also monitoring the spread of the virus.
Boston Market Corp. said it has been assured by Butterball LLC, one of its main turkeysuppliers, that the company's birds are being raised in areas not affected by the flu outbreak.
But Boston Market Chief Financial Officer Greg Uhing said the company is watching the situation. Butterball declined to discuss specific supply-chain arrangements it has in place with its customers.
Meanwhile, some help for holiday feasts could come from cold storage, where stocks of wholeturkey hens were at 98.7 million pounds as of the end of March, a 24 percent jump over February and up 16 percent over the same period a year earlier, according to federal Agriculture Department data.
Raising birds for Thanksgiving and Christmas meals begins early in the year, with turkeys slaughtered and stored in cold storage to meet the demand at year's end, say industry officials.
Some producers are confident that supplies will largely keep pace with demand.
"There is some wiggle room" for the holidays, said Darrell Glaser, who raises 600,000 turkeys a year for Cargill Inc at his family's Bar G Ranch in Rogers, Texas.
"You may see a small impact," said Glaser, who raises the variety of turkeys sold for Thanksgiving. "Unless this outbreak gets a lot worse, I don't see it having a huge impact on our overall supply."
Still, Glaser's not taking any chances. He has increased biosecurity measures on his farm and told staff not to get close to any wild birds. Visits to nearby farms have stopped, and any trips to the Midwest have been put on hold.