It's a Wonderful World - Two Perspectives 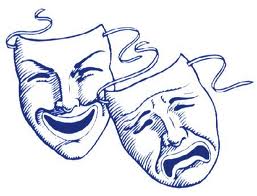 In Ancient Greece masks were used by the actors and led to the origination of the famed dual "Comedy and Tragedy Masks" that have been widely used throughout time. That is how I feel about this upcoming blog.

Someone sent me an absolutely lovely video from the BBC (on YouTube) about the planet Earth, showing all sorts of wonderful footage. Playing over the footage was the esteemed documentarian David Attenborough performing the song "It's a Wonderful World" in a speaking fashion. It was stunning and I really enjoyed it. (The smiling mask)

As luck (or bad luck) would have it the next video began to automatically play...it was a response to the previous video. Yes, it was David Attenborough performing "It's a Wonderful World," however the footage changed. It did not show the loveliness of the world, rather the dark side. It specifically showed the disregard man has for this planet and the animals we co-exist with here. I am no tree hugger/activist but I am very sensitive to what is happening to our planet.....the rain forests, the rampant pollution and the absolute inhumanity to animals.

This video evoked a very visceral and emotional response from me. I am not ashamed to say that it made me weep. Watching what was done to the environment was ghastly enough, but I absolutely lost it as I witnessed the video proof of the cruelty to the animals.

It is very graphic, sickening and I warn you about it. But we must not turn a blind eye, rather realize that this sort of inhumanity does exist and there has to be a way to stop it. I tried to watch it a second time but could not. (The tragedy mask)

As happy as you will feel about the first video the second will bring you down. If you want to have the happy face, watch the first and ignore the second. But if you want some reality right between the eyes, watch the second. Sadly, there is so much evil in this world. This video only depicts it from the perspective of planet Earth and it's creatures. We all know of the genocides that have occurred in the past and are still occurring. There is so much cruelty all around us. We need to do the best we can in our own small way to try to make this world a better place. Even simple acts of kindness go a long way. I am a believer in Karma (you will be held accountable for your actions) so I can only hope these evil people will get their just rewards in the end. It is a shame these poor animals suffer....but I do my damndest everyday to help any animal I can. They are truly God's gift to mankind.


The second, heartbreaking one entitled "A Not So Wonderful World" (watch at your own risk)
Damn, just posting this and seeing this picture even breaks my heart.