The Legacy of the late Meow (the 39 pound cat) 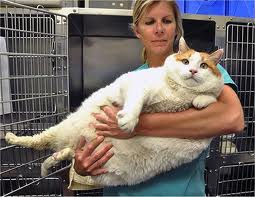 Meow, a two year old, orange and white male tabby cat, who was turned into a Santa Fe, New Mexico animal shelter last month when his 87 year old owner could no longer care for him, quickly generated international stardom. Sadly, it was because of his obesity as he weighed in at 39 pounds. (To put it in perspective, in all my years in practice, I never saw a cat over 25 pounds and that was including the giant-framed Maine coon cats). He died from lung failure, directly attributable to his obesity.

His obesity was presented as almost a comical situation in the media, instead of the tragic and deadly condition which it was, ultimately costing Meow his life. Stories were told that Meow liked hot dogs and was so fat he got stuck in things. He barely fit in his carrier. Ideally, he should have weighed 7 to 10 pounds and to provide equivalence, the 39 pounds he carried on his frame would have equated to a man weighing more than 600 pounds.

The reality is that pets in this country are becoming fatter (as are the owners) and this extra weight can hasten death. Obesity can lead to all sorts of metabolic conditions such as diabetes, heart disease, liver disease, lung failure (as with Meow), joint problems and arthritis because of the additional wear and tear because of the extra weight, and there are many other conditions. Granted, there may be an underlying cause such as hypothyroidism which could be determined by your veterinarian, however, in the face of all the overweight animals veterinarians see, this is only responsible rarely in relation to the other causes.

What are the main causes? Obviously, animals do not go out and select their foods or go out to eat. (Interestingly, the cats we see that owners let out to roam...which I do not recommend... usually are carrying normal weight). The big problems are overfeeding, improper diet, too many treats, and lack of exercise.

Unfortunately, owners are killing their pets with kindness, giving them all sorts of high fat, high calorie people foods (which cause enough problems with us) and their bodies cannot handle these foods, storing fat or suffering from disease conditions.

In addition, the diet fed should be proper for the lifestyle the pet leads. A high protein diet will be inappropriate for a dog or cat who just sits around all day. There are diets specially formulated for particular stages in the life of a pet. The amount of food given should be carefully measured so you are certain there is consistent feeding. Monitor the weight of your pets carefully, as obesity can slip up on you. Too many people just "fill the bowl" and when it is empty, refill it. Feed your pet definite meals, I recommend twice daily, of measured amounts of food. Obviously, limit treats....a few are OK as rewards...but owners tend to overdo it. Consult with your veterinarian for diet recommendations and a feeding plan. If your pet is overweight, "lite" or lower calorie diets would be a good choice. If your pet is obese, then a reducing prescription diet may need to be prescribed.

Lack of exercise is a scourge for both the pet and owner. Provide plenty of regular exercise for your pets. Walking your dogs is great for both of you! With cats it is more difficult, but you should try to set up something where they are mentally stimulated and encouraged to play.

Although the death of Meow was a tragedy, his obesity was even a larger one. The benefit that will come out of all the publicity he received is that people will hopefully realize that obesity in their pets is deadly and can have terrible consequences. I hope that the legacy of Meow will not be people laughing about him eating hot dogs, but rather encouraging pet owners to take the proper steps to be certain their pets maintain a healthy weight and that will serve as a fitting testament to Meow, who suffered and died through no fault of his own.

(Part of the above blog related to Meow's story was excerpted from a Chicago Tribune article 5/8/12)
Posted by Unknown at 12:36 PM